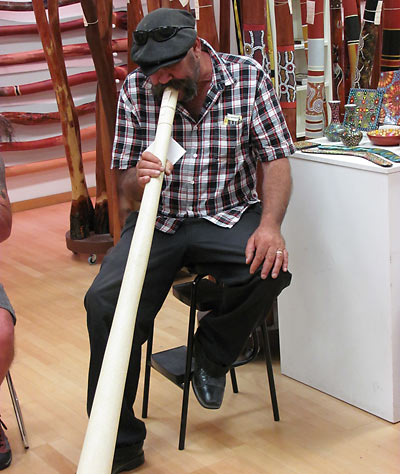 Mark Atkins will be holding a didgeridoo workshop on the 5th of March at 6pm at Spirit Gallery Sydney in the Rocks. The workshop will be for intermediate to advanced players or for those who have at least mastered the art of circular breathing. The workshop will run for 2 hours and cost $50 with all funds going to Mark.

Mark is one of the most recognised didgeridoo players in the country. Mark is also recognised internationally for his collaborative projects with some of the world’s leading composers and musicians. A descendant of Western Australia’s Yamitji people, as well as of Irish/Australian heritage, Mark is known for his skills as a storyteller, composer, percussionist, visual artist and instrument maker.

We already have 4 places booked and will limit the session to a maximum of 9 or 10. If you are interested send us an e-mail at info@spiritgallery.com.au or call the store on 92475961 to book your spot.

Our good friend Shibaten was kind enough to drag all his equipment up to our store and give us a rare intimate performance with the full ensemble. Two videos of his favourite songs.

Shibaten has finished his 3 month stint in Australia and will now head to Singapore, Japan and possibly to Europe or the USA to continue his unique one man performance to audiences around the world. We expect his return to Australia in the next 18 months.

OR check him out on Facebook where he has a huge following  https://www.facebook.com/shibaten

Scottish Born NZ based Kenneth Sand paid us a visit a few weeks ago. Kenneth has been teaching and playing didgeridoo for over 20 years and is one of those rare freakish players that is equally comfortable playing both traditional and contemporary didge.

He has studied Aboriginal music for years and also studied traditional crafting and playing under the great Djalu Gurruwiwi in North East Arnhem Land. He was authorised and requested by Djalu Gurruwiwi to share his experiences and knowledge to the rest of the world and encouraged by Djalu to continue teaching Didgeridoo to help foster awareness and respect of traditional Aboriginal cultures of Northern Australia.

Kenneth is also one of the few accomplished Bronze Age Horn players, having performed with both instruments regularly.

Kenneth formed the band “Resonance” in 1999, which led to him producing and recording the professional music CD called “Resonance-Organic Dance Didjeridu” which many people regard as one of the finest didgeridoos cd’s ever produced.

Definitely, one of our favourite store visits. Check him out!