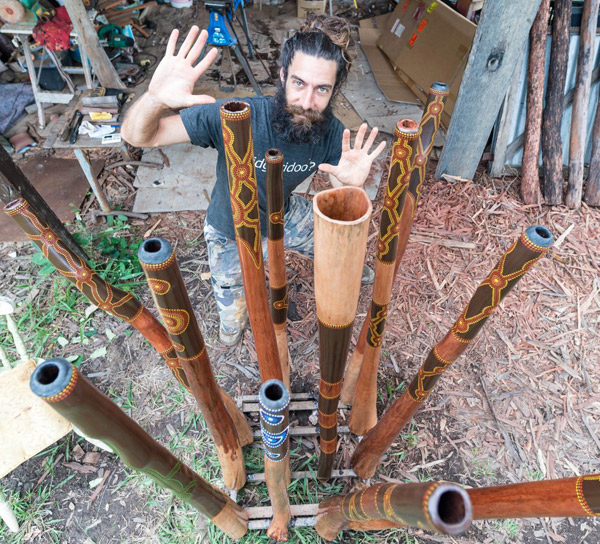 The wait is over! Introducing our newest didgeridoo range – Jesse Lethbridge Didgeridoos.

Most didgeridoo enthusiasts would already know Jesse for the high quality perfectly crafted instruments he has been producing for almost 15 years. Jesse has also produced several albums, both didgeridoo and multi-instrumental, and often tours around Australia.

Jesse started playing didgeridoo in 1998. In 2000 he traveled throughout Australia to deepen his connection with the didgeridoo, culminating in a visit to Arnhem Land where he spent time with internationally renowned didgeridoo maker, player and spiritual custodian of the didgeridoo, Djalu Gurruwiwi.

By 2004 he had devoted his days to crafting these incredible instruments. As Jesse explains-

My workshop is in the pristine Bellingen shire in New South Wales, Australia. where its mostly balmy enough to work outside. I live and work on an acreage with my beautiful partner and two children. I am following my bliss; playing music, making instruments, singing, exploring the world, basking in nature and family life.

Alongside my love to play the didgeridoo, I play 6 and 12 string guitar, mandolin, percussion, native American flute, first generation hang and recently began journeying with the gubal. Enjoy checking out my creations!

We are delighted to be able to showcase these wonderfully crafted instruments to the world. Buy your Jesse Lethbridge Didgeridoo Today!